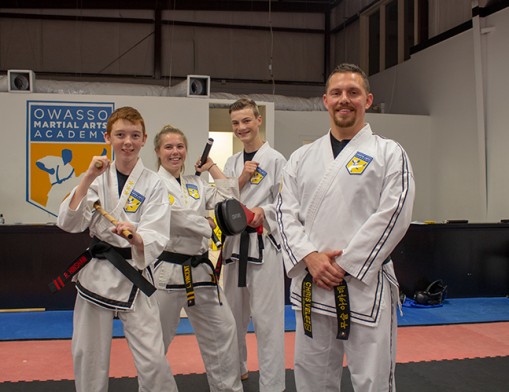 In Stephen Covey’s bestselling book, 7 Habits of Highly Successful People, the author lists the following as one of the foundational habits: “Begin with the end in mind.” This means that many successful people have learned to set solid goals before beginning their endeavors, which will help them to keep focused when inevitable roadblocks are thrown into their paths.

At Martial Arts Academy in Owasso, owner and instructor Chris Velez believes that when a student signs up for Martial Arts instruction, the “end in mind” should involve far more than just a mastery of the martial arts or an ability to defend oneself. He believes a person should take away self-confidence and discipline—two attributes which are integral to traveling successfully down any avenue in life.

At MAA in Owasso, Velez and company strive to create a culture of respect and discipline where students can learn to be leaders of integrity and character. Part of being a leader involves making wise choices and Velez explains that “without solid self-confidence it is difficult to make these choices.” He goes on to point out that confidence not only helps a person handle high pressure situations amongst his or her peers, but also creates a success oriented mindset. “We want to help them see themselves as successful,” says Velez who adds that even with confidence, in order to achieve any sort of success, students must practice discipline by “ignoring what they feel like doing and doing what they know is right.” At MAA, confidence and discipline work together, as students build confidence when they reach goals through practicing discipline.

Having started at the age of six, Chris now owns his own studio and has earned his fifth degree black belt.

Watching kids develop through the program is one of the greatest joys of the work he has done for many years. “Whether or not they come in initially to gain self-confidence, they gain it,” he says.

Through the discipline and structure of martial arts training, students are encouraged to step out of their comfort zones and try something new. There is fear, anxiety, butterflies in the stomach. They usually don’t succeed the first time, but in a non-intimidating and supportive environment, they are encouraged to try again and again until they succeed. “It’s a process of learning and trying until they reach success,” he explains.

They learn how to accept challenges and how to focus and perform under pressure. Every time a student pushes himself or herself to reach a goal and accomplish it, a little more confidence is built.

Behavioral scientists agree that self-confidence is one of the main drivers for success in life. It’s a gradual process, but one that has a direct impact on personal development and life-long benefits. Most often the candidates with self-confidence and soft skills tip the scales for job promotions or leadership roles in the community.

Chris and the other instructors hold all of the students to a high standard that may not be required anywhere else in their lives. A code of conduct is strictly upheld. They bow to show respect for authority figures. They address one another as Mr. or Miss. And they show appreciation for the achievements of other members.

The goal is to teach each student to become the type of person who is always prepared to do their absolute best in whatever they set out to accomplish and become a positive example for others to follow. It is not an easy journey, but children as young as seven or eight have come up through the ranks and earned their black belts.

“When kids have a positive self-image,” he explains, “they develop a success-oriented mindset and see themselves as being successful, no matter what they are doing.” Parents often tell him how the once-shy kid who was afraid to speak in class has improved grades and gone on to make big commitments.

He also hears comments about positive behavioral changes toward family members, how they handle peer pressure a lot better, and how they effectively deal with negative opinions from other people.

Classes are Monday through Saturday (Fridays by appointment). All family members are welcome.

Martial Arts Academy of Owasso is helping to instill discipline and confidence into students that will last them a lifetime. “We want to help students develop a way of thinking that continues after classes are over and the black belt goal is reached,” Velez says. “This combination of confidence and discipline can provide a ‘stepping stone’ to other accomplishments.”